What is Habit Stacking?

People are often looking for rapid transformation and instant success. They want to “get shredded before summer” when it’s only 30 days away or “lose weight before their wedding” when it’s happening next week. What they often fail to realize is that small habits and little choices are literally transforming us everyday.

Here’s an interesting statistic, if you can improve by just 1% every day for an entire year you’ll be 37% better by the end of the year.

If you get 1% worse you’ll middle down to essentially zero. 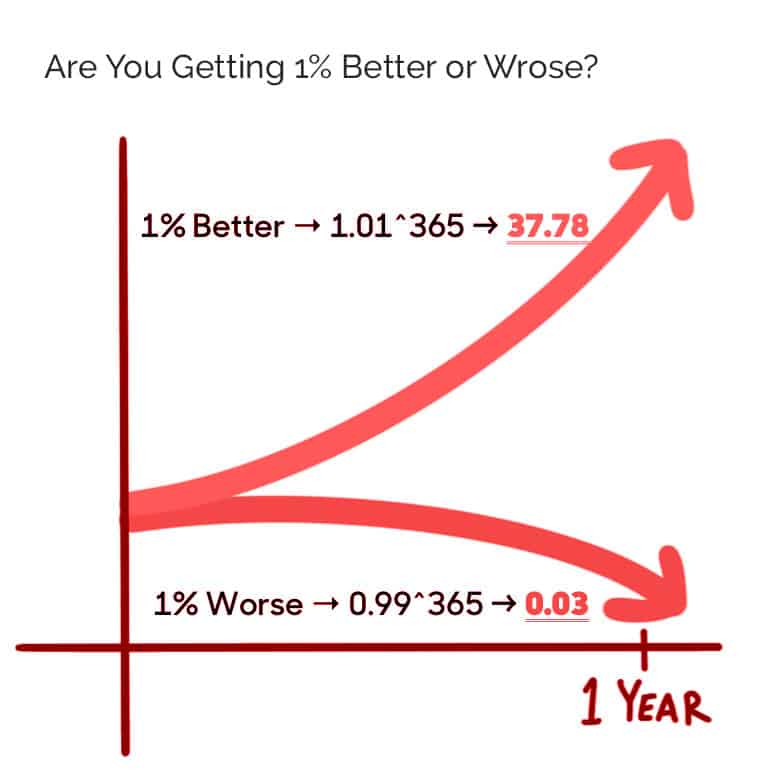 That’s why it’s so important to focus on long-term goals and develop the habits that will move you in the right direction. No matter how small they may seem on a day to day basis, they hold tremendous potential to positively impact your life. I’ve said it before and I’ll say it again, consistent imperfection trumps inconsistent perfection any day of the week.

What is habit stacking?

You can do this with any existing habit, brushing your teeth for example. For this challenge let’s focus on a negative behaviour as our trigger.

And here’s three healthy habits that you might want in your life:

Get it? I thought so.

Now that we understand what habit stacking is let’s talk a little more about why it works.

In an attempt to simplify the profound complexities of behavioural science let’s just look at one principle and how it relates to stacking habits.

There is a scientific phenomenon called synaptic pruning. Rather than try and explain the details around synapses and neurons let’s consider that we all have certain skills. These skills are like roads that have been paved in our brain. As we age our brain lays down more asphalt, turning roads into highways and allowing us to express our skills with increased ease and expertise. These skills become reflexes and are often performed automatically.

Alternatively, the older we get, the harder it is to pave new roads and develop new skills. This is due to synaptic pruning. Our brains essentially have less “asphalt” to produce new “roads” as we age.

We all have “roads” in our brains that we are “driving” down automatically. For example, you’re likely very efficient at remembering to take a shower everyday or turn on your morning cup of coffee and it’s unlikely that you have to motivate yourself to do it.

When it comes to building new habits you can use this to your advantage. Rather than trying to motivate yourself to perform a new behaviour at a particular time or place, you simply use your previous behaviour as the trigger to perform the new habit. And BAM! Now you no longer have to remind yourself to fulfill the new behaviour.

Better yet, we’re not even asking you to give up your bad behaviours, rather just “stacking” good behaviours around them. How awesome is that?!

Pro tip #1: Begin with the end in mind. Project yourself even further into the future, lying on your deathbed, with only moments left in your life. What’s important to you now that you’re facing death? Having clarity on what’s important to you in the long-term will help you determine your short-term goals.

Pro tip #2: Design your environment so that it’s easy to achieve your good behaviours and difficult to indulge in your bad behaviours. To some degree, we are all victims of our environment. I wouldn’t go so far as to say that our environment determines our destiny but a negative environment plays a pivotal role in shaping our decisions which ultimately determine where we end up in life. Let’s face it, you might be able to overpower your environment temporarily but eventually your willpower dwindles. Set yourself up for success by providing the best environment that you can. For example, if you want to meditate between Netflix episodes, set up a meditation pillow, download a guided bodyscan, and place a scented candle out prior to starting your first episode. Now you’re all set and ready to go and you’ll find it much easier to take a little break between episodes. I wrote an article about the importance of changing your surroundings, click here to read it.

Pro tip #3: Optimize for getting started, not the finish line. Ensure your new habit is so easy to achieve that you are guaranteed to succeed. We often get too ambitious when setting out changes in behaviour, attempting an entirely contrasting diet or jumping right into high intensity exercise for example, only to give up shortly after starting. If you’ve fallen victim to this tendency in the past don’t do it again here. In fact, I’m recommending that you take the exact approach. What is the simplest, easiest habit that you’re certain you’ll achieve? Start with that, put in the reps day after day and build from there.

Pro tip #4: The best way to change long-term behaviour is short-term feedback. You should reward yourself and the new behaviour as quickly as possible. Do this by staying consistent in logging your scores in the app directly after you complete your new behaviour. This will release a little dose of some neurotransmitters, making you feel good in that moment and strengthening the new habit over time.

Coach Errol Clark holds over 12 years of experience as a performance coach and has helped hundreds of clients lose weight, increase strength, improve function, and decrease pain in their lives.

Errol believes in continuing education and constant learning. He is one of the few trainers in North America to successfully complete the Crossfit L3 CCFT designation and the OPEX CCP coaching modules.

Errol specializes in behavioural change and has extensive knowledge in program design. He also has a refined skill set for improving the nuances of functional movement.